Box Baltimore, MD Original SS-5 forms which individuals filled out when applying for Social Security. Access to Records and Fees:. Be sure to provide your address and daytime phone number. Forms also available via the internet. Description of Resources: An on-line resource of deaths reported to the Social Security Administration between and the present.

It contains birth date, death date, state of issuance, zip code of residence at time of death not necessarily where individual died for people working after Access to Records and Fees: A number of free sites still exist to access the information. These sites have different searching capabilities. Stephen P. Morse Website: www.


Search forms to access the Ellis Island website and search in one step, search ships in Morton Allan Directory, or obtain pictures of Ellis Island Passenger Ships in one step. Census aids for finding EDs and soundex for , , and census. Aid for creating your own search tools.

Last update July It is owned by ProQuest.

Access is via authorized institutions such as libraries. Description of Resources: 1. Every page of each book is presented and can be easily downloaded or copied.

Observation when doing a Web Merge on an SSDI Record

The PERiodical Source Index is a comprehensive subject index covering more than 6, genealogy and local history periodicals. The user has the ability to search and browse these journals. If this is a proper way of preparing a reference note, what can we properly put in the first layer? Shouldn't identification of a source be part of the citing layer of our own reference note rather than used as the identification of the original item in the first layer of our own reference note?

To some extent, this harkens back to my "Questions on draft registration cards" query where you said that, at least for an image, "Layer 1 cites only what is visible or what you can identify by paging backward or forward in the record set, as you would do in using the original.

Can we go outside the source given by FamilySearch? And, again, I am left with the question of whether any such information-found-on-my-own can properly be put into layer 1 or can only go into layer 3? If it can only go in layer 3, then haven't we destroyed the layered citation because there is nothing to put in layer 1? So the reference note at the beginning of my above post should have been something like:.

In a layered citation, the layer for the original record and the layer for the derivative can both be standalone citations; but the portion before the semicolon is not complete in and of itself. Replacing the semicolon with a comma as per our online example at This is where you lost me: "Shouldn't identification of a source be part of the citing layer of our own reference note rather than used as the identification of the original item in the first layer of our own reference note?

The answer to this would be: With considerable risk. For many sources that historical researchers use, there are multiple versions. This is one of those cases. In fact, one purpose of EE A simple corollary here would be citing a page from one edition of a book when we actually used a different edition. My goal wasn't to have a layered citation. Or to put it another way, isn't that what you were suggesting in your discussion about layered citations?

This is before we even get to the point of deciding whether we have enough information to have, as you put it, a "standalone citation" in each layer. I was also trying to ask whether a lack of information about the independent information might cause us to abandon the layered citation due to the inability to make layer 1 a standalone citation. It seems to me that you may have answered "yes" to that above.

For example, let's say a database provided an image of a page of a book but that's all we know -- there is no title or other information in the image to tell us anything about the book, and the database gives no source. It would be difficult or impossible to come up with a layered citation similar to what is found at EE 9. 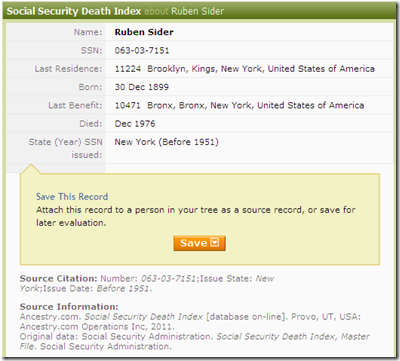 So, for my example above, if I did a Google search for some of the words in the imaged page and learned what book the imaged page was from, can I use that information to create a layered citation, particularly, to put the normal book information in layer 1 of the reference note? It wasn't my intent to get into different versions of the SSDI. When I referred to DVDs provided by the SSA, 1 I was just using that as an example of information not found at the website, as part of my question if we are restricted to that website's information in coming up with a reference note, and 2 I was thinking that your knowing that information was helpful in leading you to conclude that FamilySearch probably didn't "rekey all the data.

If we want to add, to a citation, information that isn't shown in that source or cited by the provider, then we would have at least two approaches: a we could add another layer to the citation. Or b we could end that citation with a period, start a new sentence, and then write whatever we want to say—for as many words, sentences, or paragraphs as we might want to add.

If a database provided an image of a page or a book but no other information, then there would be only one layer to the citation. If we wanted to emphasize the image, we'd cite that image and proceed to cite the website or book in which we found it. If we add to a citation information that we discovered elsewhere via a Google search or elsewhere in EE , then we're back to Point 1 above.

We could add it in a separate layer in the citation, making it clear that we got it from another source. Or, usually a better approach, we would simply close out the citation, start a new sentence, and say what Google's Source or EE had to say.

Dennis, I'm still having difficulty entertaining the idea that FamilySearch would have rekeyed all the data in the SSDI which, at this point, is approaching ,, records. Online listings of the SSDI give both the date of birth and the date of death or at least month and year , location of last residence and state the SSN was issued. The SSN itself may not be provided. Are the SSN and year of death included in the citation in order to differentiate the person cited from others with the same name?

Would there be any disadvantage to capturing both the birth and death dates and state of issue to differentiate people who had the same dates of birth and death but no SSN provided online? For example:.

Smith , SS number issued in Illinois. Smith, , SS no. Along the line of what Brian G. No one would fault you for either decision. In our view, this is a classic case of, "It's your citation and your research; so you can add as much to it as you want to add. Main navigation.

Social Security Death Index. Log in or register to post comments views. Forums Citation Issues. Newonash, Newonash, You've flagged another example of our oft-quoted point: citation is an art, not a science. In this case, we have a database that represents at least two significant processes: The original database was created by the Social Security Administration, whose employees eyeballed its records, extracted out certain pieces of data, and keyboarded that data into the database.

FamilySearch obtained that database, eliminated certain pieces of information, and then presented the remaining information under a new title. You republish that book, but leave out his appendices. Let me ask some questions, Let me ask some questions, seeking answers that will help me decide which of the reference note possibilities to go with. Dennis, Dennis, You raise good questions about the extent of FamilySearch's involvement. In the meanwhile, with regard to your last question: If a city or state government created a database from its records and licensed its creation to a web provider, then it would be appropriate to attribute the database to that city or state.